Bertelsmann recorded positive business performance in 2017, achieving revenue growth and increases in Operating EBITDA  and Group profit. This development was accompanied by further strategic progress with Bertelsmann’s transformation into a faster-growing, more digital, more international and diversified Group. Group revenues rose by 1.4 percent to €17.2 billion (previous year: €17.0 billion), driven by organic growth of 1.7 percent. This was generated in particular by the TV, music, services and education businesses. The revenue share generated by the strategic growth businesses increased to 32 percent (previous year: 30 percent). Operating EBITDA of €2,636 million was above the high level of the previous year of €2,568 million, despite start-up losses for digital and new businesses, which, for Bertelsmann Education Group and RTL Group alone, amounted to €-69 million in total (previous year: €-71 million). RTL Group, BMG and Bertelsmann Education Group were mainly responsible for the improved earnings. The EBITDA margin improved from 15.2 percent in the previous year to 15.3 percent. Group profit increased from €1,137 million to €1,198 million. Economic investments during the reporting period increased to €1.8 billion (previous year: €1.3 billion), in particular as a result of the shareholding increase in Penguin Random House. For 2018, Bertelsmann again expects positive business performance and continued progress with the implementation of its strategy. 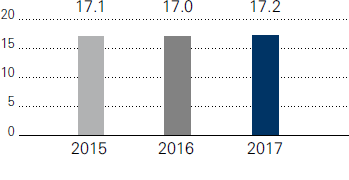 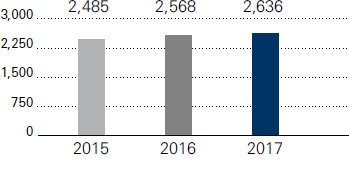 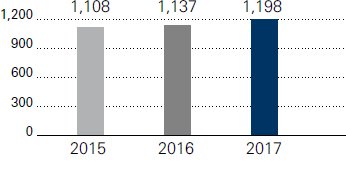 Bertelsmann at a Glance
Corporate Profile